In late 2015 at a meeting of the Southampton Heritage Foundation the owner of Solent Sky Museum, Alan Jones, made a remarkable and generous offer to his fellow committee member, Alan House, a former Deputy Chief Fire Officer. Alan Jones said that due to the relocation of the Air Training Corps, he had a large area of his museum that he wanted to offer as a museum space for a Fire Service Museum. Alan House, aware that Hampshire Constabulary History Society was also looking for a new home, asked if he could extend the offer to them to form a joint display area. This was agreed and contact was made with former Chief Superintendent Derek Stevens, the Curator of the Police historic collection.

As a result the Hampshire Police and Fire Heritage Trust was established when the Curators of the Police and Fire historic collections formally agreed to set up a shared museum space at Solent Sky Museum in Southampton. Both services had previously set up museums to showcase the history of their respective services. However in recent years both Museums had been forced to close due to operational requirements for additional space. Both collections were put into storage.

The Trust was formalised in March 2016 with a formal Constitution and the appointment of eight Trustees, four Fire and four Police. Nigel Atkinson Esq., the Lord Lieutenant of Hampshire agreed to be the Patron and the Chief Officers of Hampshire Constabulary and Hampshire Fire and Rescue Service agreed to be joint Presidents.

The newly formed Trust then set about the task of transforming an empty room within Solent Sky into a professional Museum space for the Police and Fire Collections. Both services provided generous start up funding which enabled the Trust to facilitate the creation of the Museum. Donations of display cabinets from the Army Museum of Music, Winchester College and Hampshire Constabulary were also gratefully accepted. In addition the Trust was given a very generous grant from the Southampton Police Club Trust Fund.

A team of volunteers then spent eighteen months creating the Museum and preparing the displays of previously stored artefacts, document and photographs. A permanent ‘Museum Working Party’ which was responsible for the creation of the museum was set up. It consisted of former Fire officers Alan House, Ralph Deacon, Paul Turner, Charlie Knight, Gary Wragg, Mick Chaplin, Phil Webb, Lionel Williams and Colin Mockett and former Police officer Derek Stevens and his wife, Jackie. The ‘Museum Working Party’ spent many hours decorating, building and preparing the space and creating professional displays. Several other retired Fire and Police officers joined in as and when they could.

The Museum was formally opened in July 2017 by Nigel Atkinson Esq., Lord Lieutenant of Hampshire. 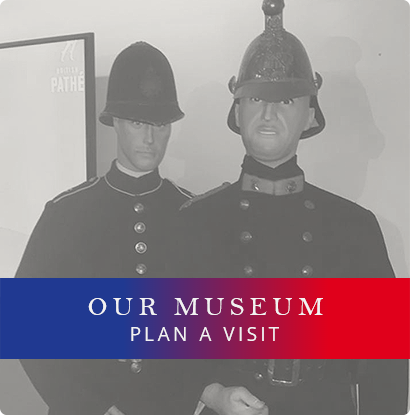 Can we help you?

We will be pleased to try and assist. Contact us and we will see if we can help.

Can you help us?

We are always looking to add to our collection and to our knowledge. Photographs, documents and artefacts from the past are always welcomed.

ARE YOU ABLE TO VOLUNTEER?

We are always looking for help at the museum. Please contact us for more information.